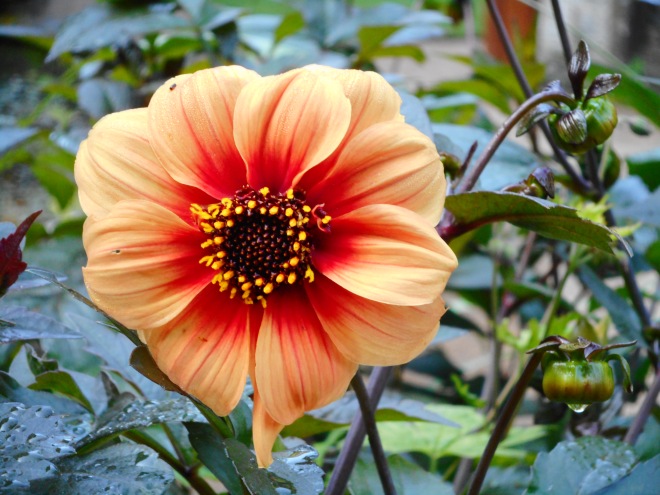 After a few weeks of reading only for pleasure and writing only for work, I decided to take a break and read Jonathan Coe’s Number 11. I’ve always liked Coe’s books, his deceptively simple writing style appeals to my desire for clarity in a chaotic world, and I was in dire need of organisation, albeit fictional.

Number 11’s plot is “baroque”, as one reviewer puts it on the cover. Coe uses dozens of characters to shape a State of the Nation novel (or Nate of the Station, as one character puts it), and I quite enjoyed the rollercoaster reading experience this approach generates. But there’s one scene in particular that affected me deeply, and I’ve spent the past few days wondering why.

Former singer Val, now down and out, decides to take part in a reality show to earn some much-needed money and revive her ailing career. Upon arrival she is forced to take part in a challenge which involves putting a large living insect into her mouth and keeping it there for as long as possible. Val has a phobia for insects and the experience is so traumatic for her that she develops PTSD.

What made this scene so affecting, at least for me, is that it is narrated from Val’s perspective. In other words, we don’t just see her putting the insect into her mouth, we also find out in graphic detail what it feels like to do this. Both mentally and physically. Val eventually spits out the insect when she feels it defecate into her throat. Even for me, someone who luckily doesn’t have any major phobias, this would be pretty high on the list of horrendous experiences I’d prefer to avoid.

In fact, several days later my stomach still feels a bit queasy just writing about the scene. It reminds me of the show I accidentally watched a few years ago while babysitting late at night. Three contestants ate living insects in order to win an exceptionally ugly car. Witnessing fellow humans commit actions that were disgusting, stupid and – particularly for the insects involved – needlessly cruel fascinated me as much as the experience unsettled me.

I like books that make me feel uncomfortable, not for the sake of it, or because I’m a sadomasochist, but because they force me to think. Not everyone feels the same, apparently. A few days ago I read an angry rant on Twitter – where else? – about the upcoming Joker film. The gist of it was that the film, judging from its trailer, promises to add nuance to its notoriously evil protagonist. Why would anyone want this, the author asked, possibly foaming at the mouth. Why would you want to understand how seemingly normal people can be driven to commit incomprehensible acts their sane peers would never even dream about?

While I would always defend anyone’s right not to like any kind of cultural product or avoid it at all cost, I will be watching the Joker film, if only to make up my own mind (difficult to do based on a two-minute trailer, after all). Trying to understand how evil works is not the same as glorifying it. I find the idea that every human is capable of cruelty and evil as disturbing as the next person, but looking at recent history, it seems a more realistic worldview than the black and white idea that humanity is divided into the good, the bad, and the ugly.

From an entertainment perspective, adding a touch of evil makes characters more interesting. I’m yet to meet the first person who is always good or always bad. Fictional characters without moral flaws tend to be exceptionally boring and the only way to breathe some life into them is by contrasting them with more ambiguous colleagues. A notable example is Carrot, a recurring character in Terry Pratchett’s amazing Discworld series. On its own, his goody two-shoes persona would be annoying. Paired with the rather colourful cast of creatures that populates Ankh-Morpork, however, he just works.

The insect scene in Number 11, disgusting as it may be, works because Val is so likeable. Unlike most of the participants of the dreadful reality show she takes part in, fame and wealth are not her main drives. She wants to be known, to be respected, to live a dignified life. She has been sold a dream of artistry, has just lost her job, is a victim of a system that doesn’t care about her in the slightest and ends up making a fool of herself. Just like most of us, really. It’s a depressing message but even a quick peek at last season’s Love Island demonstrates that it’s hardly a fictional one.

It’s highly unlikely I’ll ever participate in a reality show, or put insects in my mouth for that matter, but Val and her predicament I can relate to. No matter how disgusting her actions are, they invite understanding and empathy instead of moral superiority. Val is fictional, a character, but I ended up rooting for her. And while I still think no cultural product should include violence purely for its own sake, for cheap shock or entertainment, I do believe it’s important for art to cover humanity’s less savoury sides. If not to entertain, then at least to function as a mirror, and to make us think.

Image my own – A flower, just to offset the image of insect eating